Here are some more from the backlog of fashion related things I’ve been enjoying (and none of them are sales, because this isn’t that kind of blog). 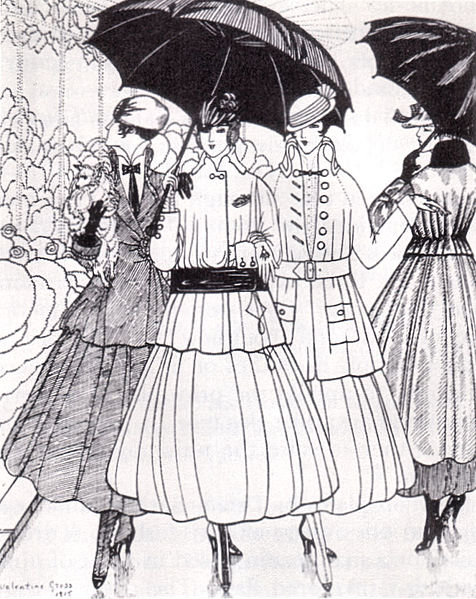 It’s finally getting into some real deep fall / early winter weather here which currently is a bit exciting, but I’m sure I’ll feel differently in two weeks.

If you’re gonna watch one fashion YouTube channel, definitely make it Zoe’s. She does YouTube full time now, but she has worked in industry and taught fashion illustration professionally for several years. Her way of speaking is definitely on the no-bullshit, slightly sassy side, but her videos are always very thorough

Here she just goes over a bunch of the most common types of coats, from car coats to peacoats to opera coats.  She starts off with some tips on illustrating coats, but if you want to jump to the vocab, it starts at 2:14. Knowing fashion vocab is super helpful to help narrow down your preferences when shopping, and even outside that I enjoy seeing the variety of things that people have come up with.

Vogue: A quick history of culottes

The Ups and Downs of Culottes goes over some key moments in the popularization of culottes. I’m only old enough to vaguely remember when they were trendy in the early 2000s, but I think I always heard them referred to as gaucho pants. It seems that gauchos are more pant-like, whereas culottes are meant to resemble a skirt, but retailers seem to call any cropped wide legged pant a culotte now so ¯\_(ツ)_/¯

For something morbidly interesting, check out A Dystopian Accessory is Born. Around here I feel like I see one fashion-y looking mask per every 100 standard hardware store P95 respirator whenever the fire season comes around. The article goes over the history of different styles of masks in Asia (starting with “courtesy” masks for when one is just sick) and California (socal festivals).

It’s possible that the biggest challenge facing face masks isn’t the fashion at all, but rather convincing people they’re necessary. In some countries, air pollution is a hot-button political issue as well as a health problem. China, for example, spent years denying it had an air pollution problem at all, attempting to convince its citizens to disbelieve their eyes and lungs. Despite a decade of visible air pollution in cities like Beijing, China only declared an air quality “Red Alert,” signaling that the air quality was particularly hazardous for more than three days in a row, for the first time in 2015.

I think of those ever start really taking off here, I’d probably get one when we run through our current stash of respirators, but I think currently I’d feel uncomfortably frivolous wearing a patterned mask just commuting to work. I suppose you could say you’re wearing one anyway, why not have one that’s fun, but it feels weird when the world burning and all that.

I don’t religiously read every article Jean writes, but one reason I’ve never stopped checking in on her site is that she has a lot of helpful tips for alterations and such. In this post she discusses doodads you can use to help make a hat smaller, easily secure a loose shawl, shorten a bag’s chain strap, make a necklace longer, or secure a long belt without loops.

If I had infinite time, I would collect images that people said were examples of “TIMELESS LOOKS” and then show how those change throughout the years. 99% of the time on reddit I think it’s just a minimal version of whatever the silhouette du jour is, or just some outfit worn by a spectacularly beautiful person. This was the oldest What Are You Wearing Today round-up I could find, and now just six years down the line it’s really interesting to see how clear the silhouette change is. I think most of the outfits shown in the album are actually nice as outfits generally, when it comes to visual balance and accessories and all that. I think it’s always a good exercise to go look at outfits that are not currently trendy and see if you can identify what elements you do and don’t like outside the lens of “do I just not like it because it looks dated”, or seeing how layering and balance works in silhouettes you’re not as used to seeing.

Rosenrot makes a couple of appearances in that album, from back when she still reddited (apparently she got sick of people being rude to her so she left… can’t blame her). It’s cool to see how her outfits are the most avant garde of the bunch, but in retrospect seemed to have been the least identifiable as 2013. She has her own fashion line now, and you can see more of her stuff on instagram.

I’m usually not too into those “my skincare and makeup routine” videos for random celebs, but I really enjoyed these because they combine them with a cool look into what a work day is like for a bunch of different careers where appearance particularly important, or are traditionally considered as “glamorous” even if they’re not (i.e. full time lifeguard).

If you want more queen of winter inspo in your life that is not a thinly veiled marketing vehicle for Disney to sell more merchandise, you should check out Katie’s recent outfits featuring some fantasy level epic capes. I love my drapey coat but if I ever move somewhere that gets some actual snow I think I want to get an actual cape for fancy events. Below is from her Instagram, but she’s got lots more cape outfits on the blog post linked above.

I ate my bodyweight in jello yesterday and now I am channeling that into a look I guess. (I just really like jello.). This is a vintage Opera cloak I was lucky enough to find, the velvet is such high quality with none of the icky "back drag" feeling you get with cheap velvet, it is just smooth all the way and the cloak itself is very heavy with beautiful hand stitching. I have a shorter red cape I got last year and I really enjoyed it but I also wanted something with a little more "omph" for the days I wanted a more dramatic outfit. (And again, that winter folklore inspo album posted to reddits FFA subreddit had the most amazing red cloak and I was like dang, I need that in my life. I'm very easily influenced. ) I belted the scarf with the dress, I think it was the Burberry 2012/2013 runway I saw that look and it's been something i've enjoyed doing since then – belted scarves with maxis look so cool and it's a fun way to play with prints and volume in an outfit. Outfit: Vintage cloak (ebay) Scarf (thrift) Free people coat (ebay) Free people maxi (ebay) Frye boots(consigment) Mittens (thrift) #petitefashion #petitestyle #styleover30 #stylediaries #winteroutfit #winterstyle #winterbohemianstyle #winterboho #cloak #cape #winterclothes #coldweatherstyle #boho #bohemianootd #ootd #winterdarkboho #winterootd

What have you been reading/watching recently?