I got a pair of white New Balance classics (specifically, model WL574v2) recently because I wanted to expand my casual outfit options. I’ve mostly been practicing putting together outfits with relatively dressy pieces, but now I’m at a point where I can pick out specific things that work or not in outfits that I think it’s worth trying again.

The styles I generally go for are more vintage inspired or fantasy inspired. I think wide-leg cuts can be styled to pull retro, but for this set of outfits I was okay with just trying things to see what looked good without also limiting myself to highly defined style subsets.

My initial thoughts were that I would need to be careful to avoid a “pajamas but I had to walk the dog” look because most of my wide-leg pants are softer styles. I figured the usual tricks of including a more structured piece and red lipstick would help. I usually only carry a purse on the weekends because I use one of those ergonomic laptop backpacks during weekdays, but I also find that I feel a lot more put-together when my outfit includes a nice bag as those are an easy way to add some visual interest to a look.

Wide-leg pants are common in the areas I frequent (downtown office buildings area of SF + Berkeley) but not the default pant style. I work in a casual office where people wear anything from sweats/track pants/cargo shorts to more trendy looks to business causal, but t-shirt and jeans with sneakers or boots is most common. There are at least two other women on my floor who wear wide-leg pants regularly, sometimes with sneakers, so there isn’t exactly any boundary-pushing ~bravery~ involved in this on my end.

Always like to take a look at some photos for inspiration when trying a new outfit combo.

Pinterest has a tendency to become an echo chamber of 2013, so I like to check google images and current stock photos as well. The key here is to use the search filters to remove any Pinterest sources and stick to more recent photos. I think most of the stuff on Pinterest actually looks pretty nice even now, but personally I prefer a more trendy look for more generic casual outfits.

While it’s certainly a valuable skill to be able to mentally translate styling from a photo of someone who does not look much like you into a generic concept to apply to yourself, I do still try to stick to pinning photos of relatively petite models vs 6-foot tall models. On that end, I’ve found Japanese blogger and street style snaps helpful. Unfortunately I very rarely see short models who have larger busts, which I think makes a bigger difference than just height, but I take what I can and try to ~be the change I want to see~ there. Anyway, some observations, most of which seemed to line up with my initial thoughts (confirmation bias / biased data-collection def a thing but I think these were generally representative of what search pulled up for me, although that is also biased by stuff I’ve searched for before): 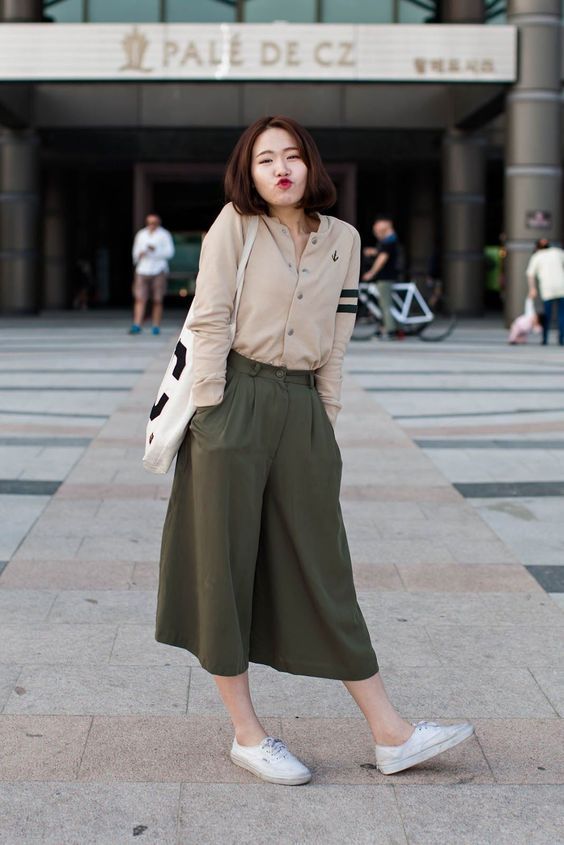 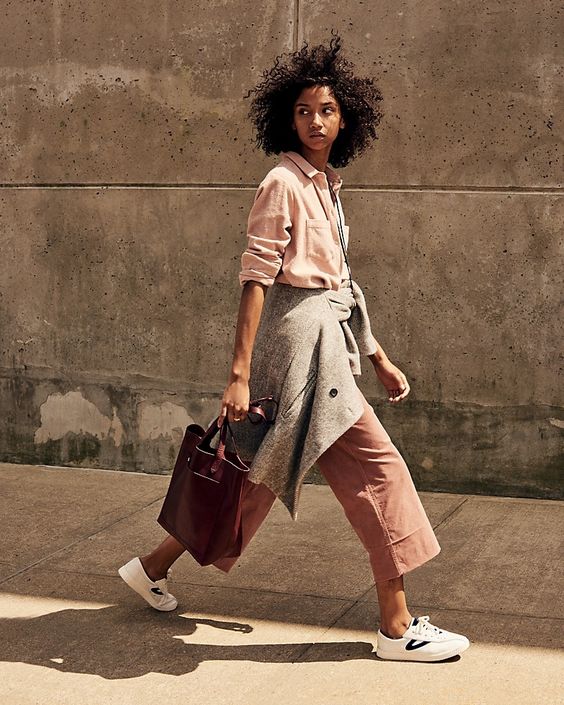 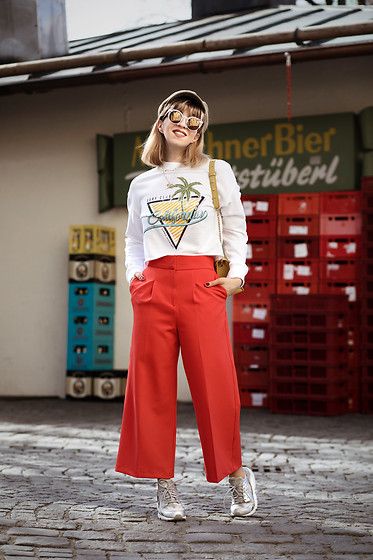 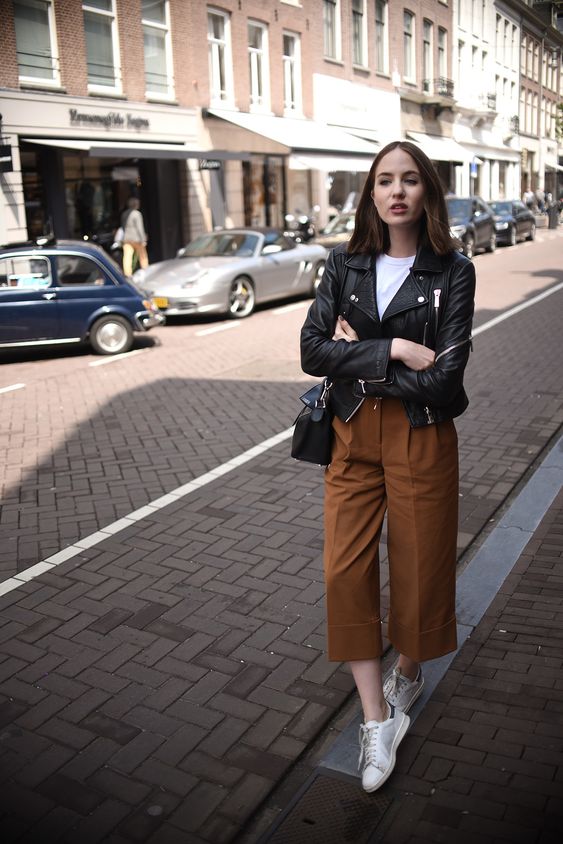 Anyway after all those pro shots you can now marvel at my less glamorous, what-I-had-in-my-closet outfits, which I wore to do things like go to the office or run errands.

My goals for these are to have fun and visually interesting looks that don’t swallow me or look matronly or stodgy. They should give the impression that I wore the whole getup on purpose and not because I had some hand-me-down pants that I just threw on because you’re supposed to wear pants when leaving the house.

This was one of my favorites of the bunch, although I suspect that the preference here comes down to whether you think “late 1970s programmer cosplay” is a covetable aesthetic.

This one is a bit of a lighter weight look with a thinner, more fitted t-shirt. So obviously there needs to be a giant fleece bomber with an exaggerated collar to balance it out / add drama 😛 I thought this was a fun and lighthearted look to wear, although seeing the photo again makes me question how much my opinions on a given outfit are influenced by how well they match my outfit photo background 🌴

I don’t regret wearing this out of the house (though at this point I also have less shame about wearing weird shit to low-stakes activities), but I think that the stiff pants with New Balances and a belt was just too much of a stodgy contrast to the summery blouse and it wasn’t a very cohesive look. I think if the pants were at least a cropped length this would make more sense.

Tried again with more drapey knit culottes. The fabric on these is kind of like a sweatpants material, so not as airy as would be ideal, but I think it looks slightly better. I appreciate the pleats on the front bringing it away from a pajama look.

Changing the bag to a straw tote also really emphasizes a summery “I’m going to the farmers market to buy only daffodils, a baguette, and 3 carrots” kind of vibe. I think next time I wear this I’ll try pushing the sleeves up a bit, because I’m not digging the boxy shape created because they end at the same line as the waist band.

Narrator in retrospect: pushing the sleeves up would have definitely improved this

I really wanted to like this outfit with the soft culottes and a thick textured ridge-stitch stripe t-shirt as a cool streetwear sorta option, but I just could not un-associate this silhouette with the look that was really popular with boys in middle school PE in the mid 2000s featuring giiiiant basketball shorts. The trench and lipstick pull it away from that but I think I fundamentally didn’t enjoy this enough to try and iterate on it.

Oddly enough, I actually like how this outfit looks more from a 3/4 back angle.

I tried this with some other jacket options. The puffer jacket just made the whole thing feel too Asian Grandma (though that would really need at least one floral print item and a hat of some kind). I think the moto jacket was okay, although the base outfit feels so soft overall that the jacket seems a bit tacked on.

Last but not least the most conventionally flattering outfit which I felt pretty cool in. This is a surplice/faux wrap bodysuit with the same culottes as the tan ones, just a different colorway. I just placed the thin waist belt over it to add some visual interest (and the belt has some fashion tape to keep the extra bit from flapping around since I don’t have any more clear hair elastics). It’s a little boring because the top and pants are nearly the same soft texture. It looks nice, though. I think the lipstick was particularly helpful in this outfit because I think otherwise I would get washed out by all the black surrounding my face. I think the sharp neckline is nice because it gives some shape to what otherwise is a mass-of-fabric look.

Well, I don’t think any of my outfits are quite awesome enough to be pin-worthy, but I did get a few things out of it.

This was intended to be a lightweight photo-heavy post, but that clearly didn’t happen. It still came in over 2k words 🙄 Anyway, thats was my response (not that anyone asked for it) to getting tired of hearing “I dOn’T wEaR cUloTtEs beCaUsE I’m ShORt” which periodically is commented on the femalefashionadvice subreddit. Sure, it’s never going to be as easily flattering or leg lengthening as wearing a pair of high-waisted black skinny jeans with black boots and whatever top, but if you’re interested in trying new silhouettes, there are always things you can tweak in styling that can make things feel more like an Outfit for Fashion Fun or even just more flattering. You certainly can refrain from wearing types of clothing because you just don’t like the style, but don’t wholesale discount any entire category of clothes without any sort of consideration or attempt. At least just discount it wholesale because figuring that stuff out can be a lot of work and you’ve already got a lot of outfits you like 😛 and not because of your body shape.

Anyone else have some lengthy process they go through when preparing for or evaluating a new new silhouette? I don’t think I’ve done anything quite this detailed for other looks besides maybe high-waisted “peg pant” style trousers or midi skirts, but as high-effort as it is to go through, I do enjoy it and feel like it improves my outfit repertoire.